Nothing can ruin a beautiful garden like weeds. Not only do they look unattractive, but they also rob your plants of space and nutrients. For the garden enthusiasts, there’s not a bigger nuisance.

Unfortunately, getting rid of them is not easy. Weeds are more than capable of multiplying until they turn into a huge, unappealing problem. If you feel like you’re losing the battle with them, don’t lose hope. Getting rid of weeds permanently is entirely possible.

In this article, we’ll take a quick look at the types of weed and how to control them. With this knowledge in mind, you’ll finally be able to bring your lawn back to life.

Before you start removing weeds from your garden, you’ll have to identify their types. Correct identification can be of great help when it comes to eradicating them. These are the three primary categories:

Broadleaf Grasses – As you can see from their name, these weeds have broad, blade-like leaves. They are very common everywhere in Europe.

Sedges – Sedges, on the other hand, have a distinct texture and color, as well as a triangular stem. While some people like keeping them in their gardens, most want to get rid of them.

Unwanted Grasses – As the name suggests, this category contains all other grasses you don’t want in your garden.

Weeds You May Want to Keep 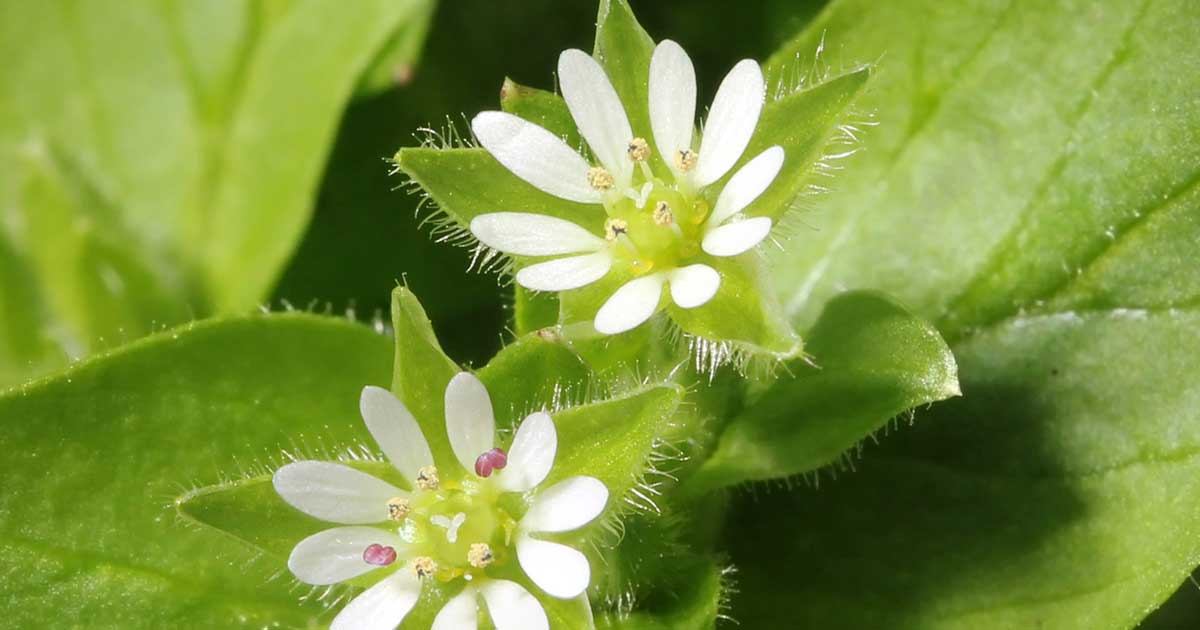 When one thinks about how to get rid of weeds, one thinks of unwanted, harmful plants. But did you know that some weeds have useful medicinal qualities? Here are the ones that are helpful in many ways:

Chickweed – Although easier to control than other weeds, chickweed can hamper the growth of your flowers when overgrown. However, it’s a rich source of nutrients and fiber. It can prevent open wound infection, reduce joint inflammation, and help with weight loss.

Red Clover – A very adaptable weed, red clover is capable of growing in the most challenging of conditions. Many traditional medicines use it for treating cough and various skin conditions.

Dandelion – With its bright yellow flowers, dandelion is among the prettiest weeds. Besides the look, another reason to keep it in your lawn is due to its medicinal properties. Dandelion helps with digestion and high blood sugar. It can also be used as natural sunlight protection. But, if you want to get rid of dandelions read this post.

Weeds You Should Get Rid Of

Unlike the weeds mentioned above, these ones should be eradicated. Some of them are challenging to get rid of, but it can be done.

Musk Thistle – This weed is easy to recognize due to its purple flower. Blooming in July, it can produce thousands of weed seeds. This makes it very difficult to control.

Quackgrass – Also known as twitch grass, quackgrass can sustain harsh weather conditions. It grows very fast and can be up to 3 feet tall.

Black Medic – This short-lived weed shrub has yellow flowers and clover-like leaves. Pulling it out can be quite difficult due to its strong root stems.

Poison Ivy – Most weeds don’t affect human health, but this one is not among them. Poison ivy causes itchy rashes a day or two after coming into contact with it.

Quick Weed – Commonly found in sunny areas, this pesky weed has white flowers and hairy leaves. It’s one of the fastest seed producers and can be very difficult to control.

Plantain – Plantain typically grows in shaded and moist areas. It has broad, flat leaves and can grow up to 9 inches tall.

White Clover – With white, round flowers and distinct broad leaves, white clover is easy to identify. It can grow 12 inches wide and up to 10 inches tall.

Crabgrass – This weed grows in almost all conditions, and getting rid of it can be extremely difficult. It is capable of producing a staggering amount of 150,000 seeds.

Oxalis – This broadleaf type of weed is common in both shady and sunny areas. It grows up to 20 inches tall and has yellow flowers.

How to Get Rid of Weeds Permanently? 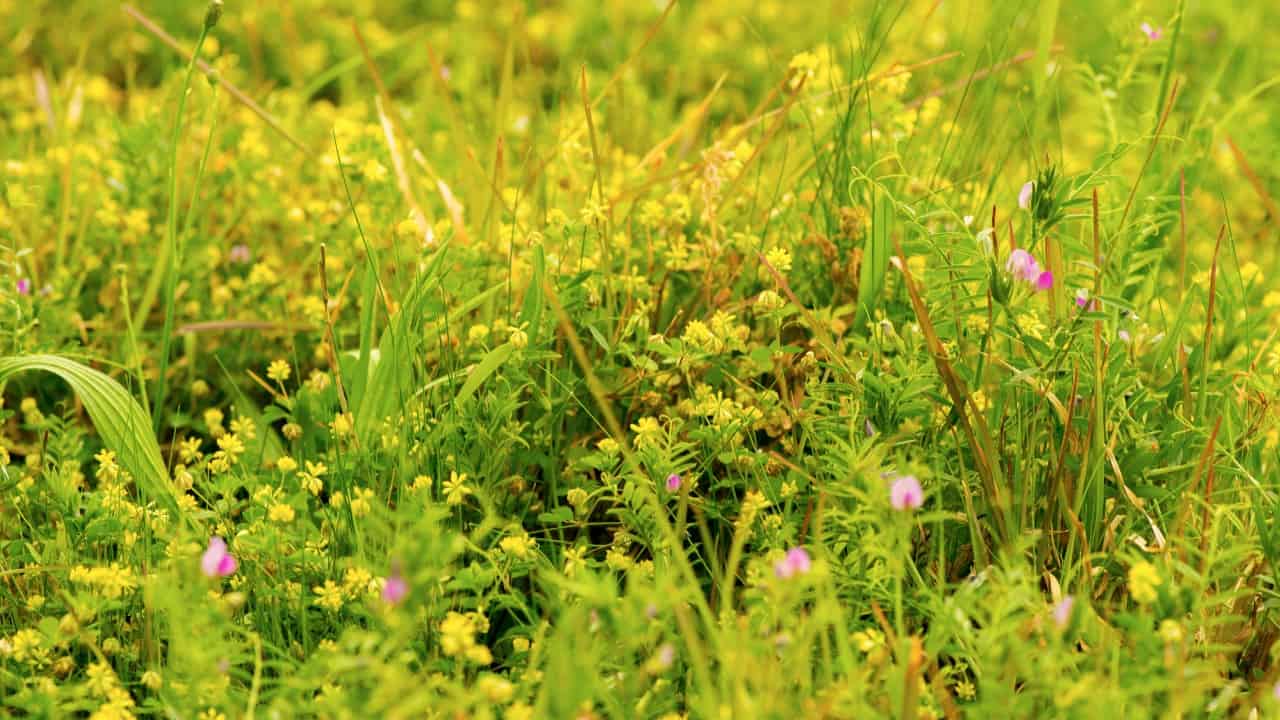 When it comes to controlling and eradicating these pests, you can do it in one of three ways – preventive, physical, and chemical. Let’s take a closer look at all methods:

The best way to control weeds is to not have them at all – prevention is better than cure. Consider the following prevention methods:

Use a weed eater: the best battery powered weed eater will make short work of weeds around the edges – but this is not really a cure.

Maintaining Grass Height – Identify which weeds in your lawn are the most common. Once you do, start mowing the grass a bit higher than the height of weeds. The grass will become taller than the weeds and block the much-needed sunlight.

Suffocating the Weeds – These pests thrive wherever they find free space and some sunlight. Deprive them of sunlight by keeping the gaps between your plants smaller.

Mulching – This process consists of covering the area around the plants with a porous material, like organic compost. It’s somewhat of a homemade weed killer. This type of compost contains insects that eat weeds. They are the best weed killers.

Kill  Weeds by Depriving them of Water – The most effective way of watering only plants and not weeds would be using drip irrigation. However, weeds with deeper and longer roots may still be able to get the water.

Optimal Fertilization – Putting too much fertilizer into your soil is guaranteed to result in excess nutrients. You guessed it – the excess nutrients will be used by the weeds.

Committing to a Weed Control Schedule – Those who want to maintain a lush green lawn or a garden have to stick to a strict weeding schedule. Always remember that containing weeds before they grow their roots is much easier than dealing with them later. Remember some people reckon that if you aerate your lawn to prevent weed growth, it also helps.

Although labor-intensive, controlling weeds physically is an integral part of the weed control strategy. Practice the following methods:

Pulling Out the Weeds – How to kill weeds? Pull them out. It goes without saying that this is the most rudimentary approach of weed control. Use gloves and do it when the ground is moist for more effectiveness. Push the best wheelbarrow around with you to put them in so you don’t have to go back and pick up the piles left around the lawn.

Burning the Weed – This is yet another simple but effective method. However, the sites where this can be done are limited – you don’t want the fire to catch your other plants.

Pouring Boiling Water – Although somewhat unorthodox, this method kills the weed’s delicate tissue, leading to its death. It’s extremely useful at places like driveways or sidewalks, or anywhere close to plants you don’t want to damage.

Covering the Garden Bed – By using household items like carpets, cardboards, or newspapers, you can prevent the air and sunlight from reaching the weeds. Cardboards and newspapers are particularly useful in this regard. They’re made from organic materials that decompose later.

Cutting the Tops – If your situation doesn’t allow you to pull out the weeds completely, you can simply cut off their tops. While it won’t permanently remove the weed, cutting their tops off will stop the seed disposal.

Letting the Animals do the Job – Depending on the area where you live, you may have the option of letting the livestock eradicate weeds for you. Goats, cows, and sheep can graze on them. And some just use that big garden tractor to cut them down on a regular basis – a lazy way that keeps them at bay – but not a great long term solution. 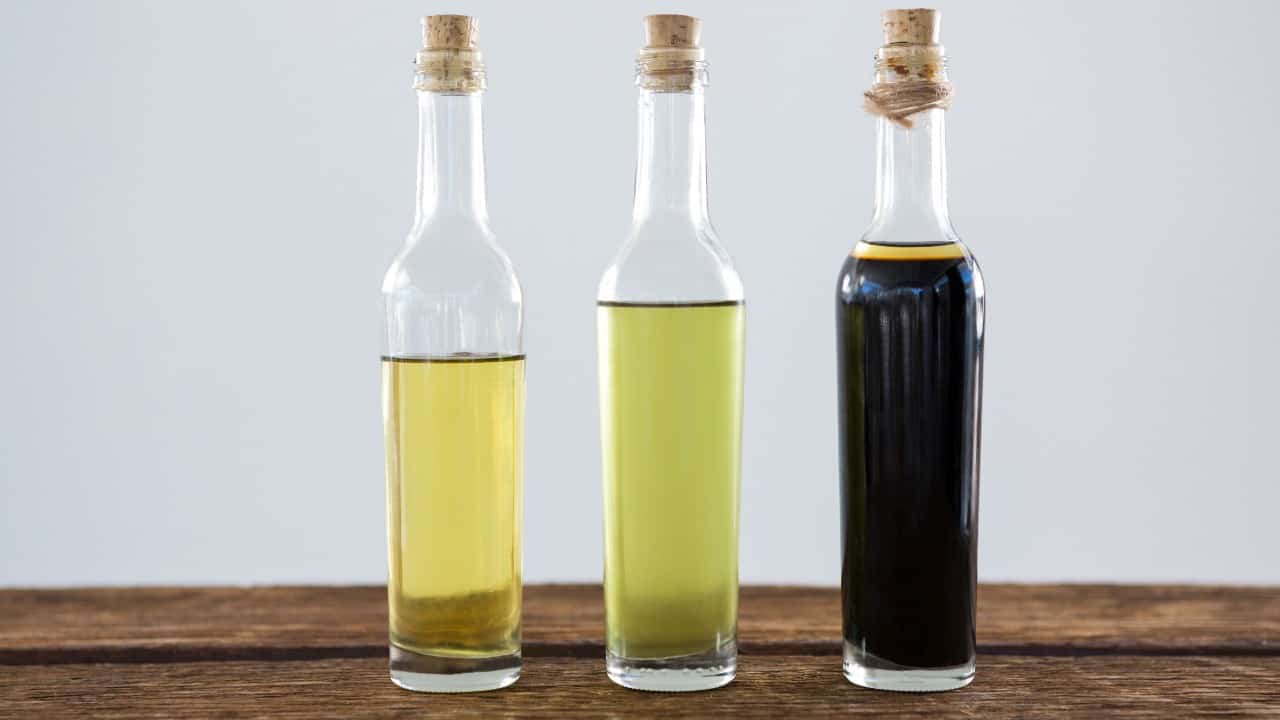 Unlike the previous ones, the chemical methods are much more effective in weed or garden pests extermination. However, we’re listing them last due to their potential side effects. They are indiscriminate and may destroy the plants you want to keep, and even harm humans.

Salt Weed Killing Solution – This simple kitchen ingredient is a natural weed killer. It is also one of the least-harmful chemical methods on this list. Mix two cups of water with one cup of salt, boil the mixture and spray the weeds with it.

Bleach – Does bleach kill weeds? Yes, it does, especially if it’s undiluted. Put some of it in a spray bottle, spray the weeds with it, and they’ll be gone in a day or two.

Alcohol – Another way to kill weeds would be to use alcohol such as vodka. When sprayed on the weeds, it takes the moisture out of them and dehydrates them to death.

Borax – This chemical compound is useful for killing weeds along the sidewalk or around the house’s foundation. As it also kills insects, it’s a two-in-one solution. You can also use baking soda for this. However, using Diatomaceous earth to kill insects would be best.

Vinegar – Useful for various purposes, vinegar can also take care of pesky weeds. It is particularly effective when sprayed near the roots. It kills weeds permanently and prevents weed growth.

“How to get rid of weeds?” is something every owner of a lawn or a garden asks himself, as everyone wants to make the yard more inviting. Hopefully, the methods mentioned above will help you with this issue. By knowing the most common types of weeds and ways in which they can be eradicated, bringing your lawn back to life will be much easier. 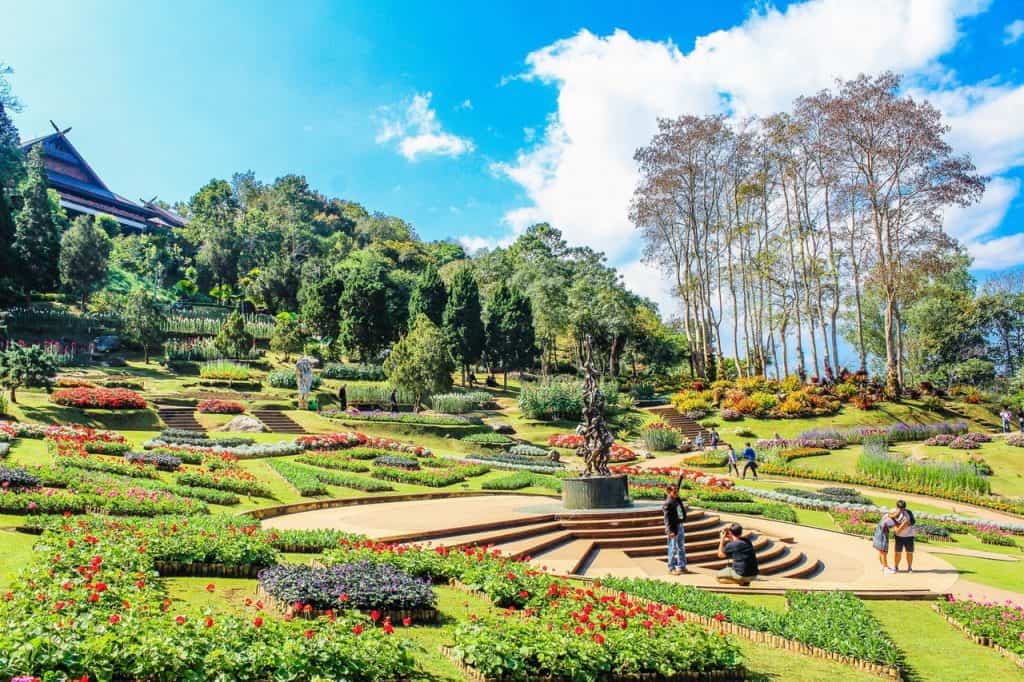 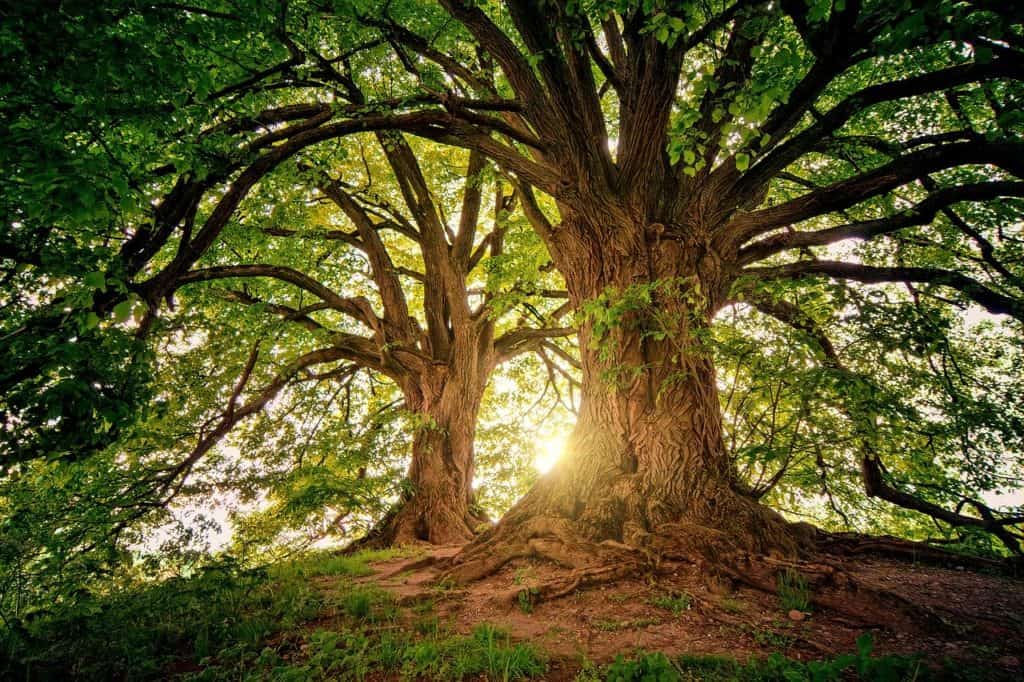 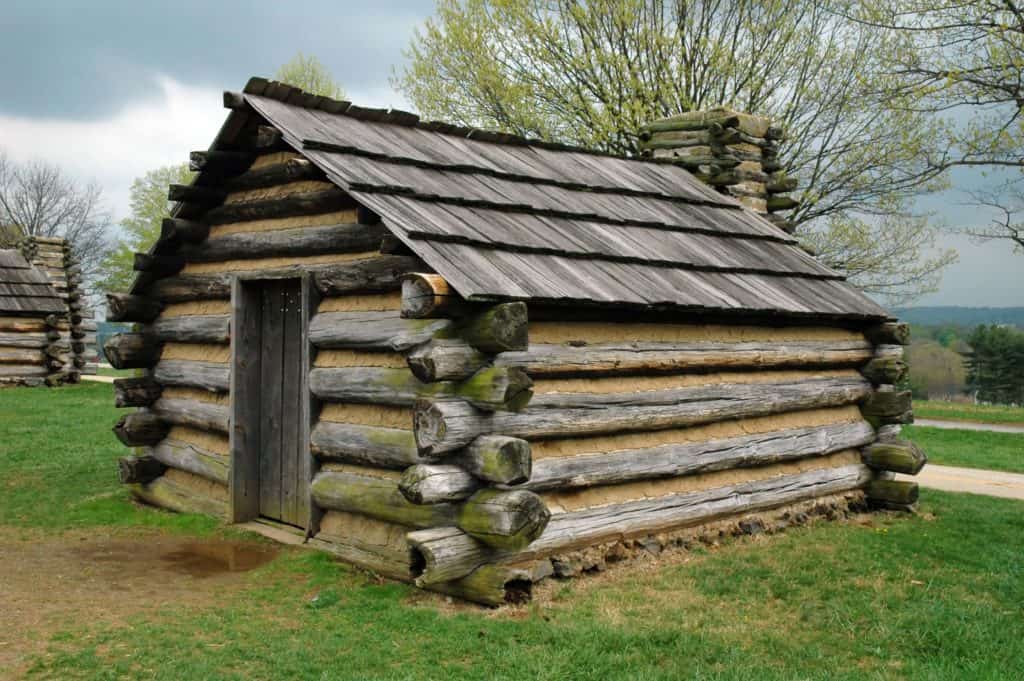 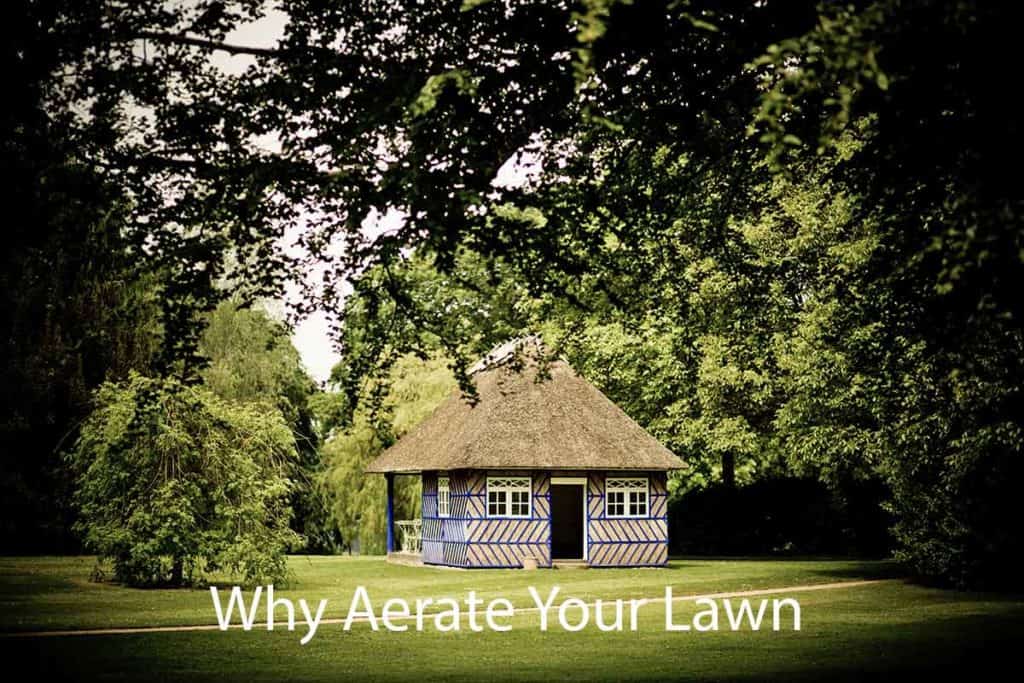 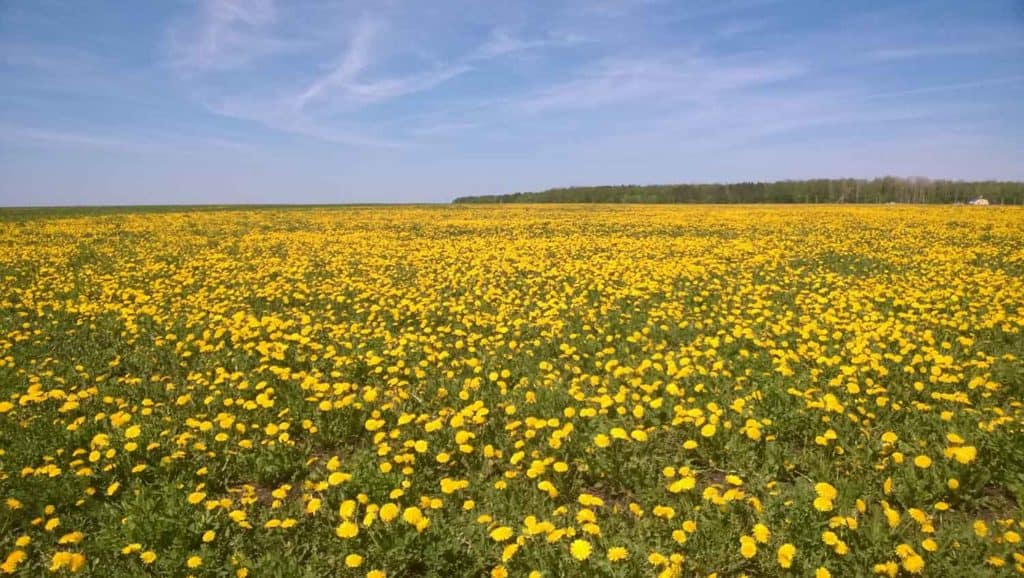 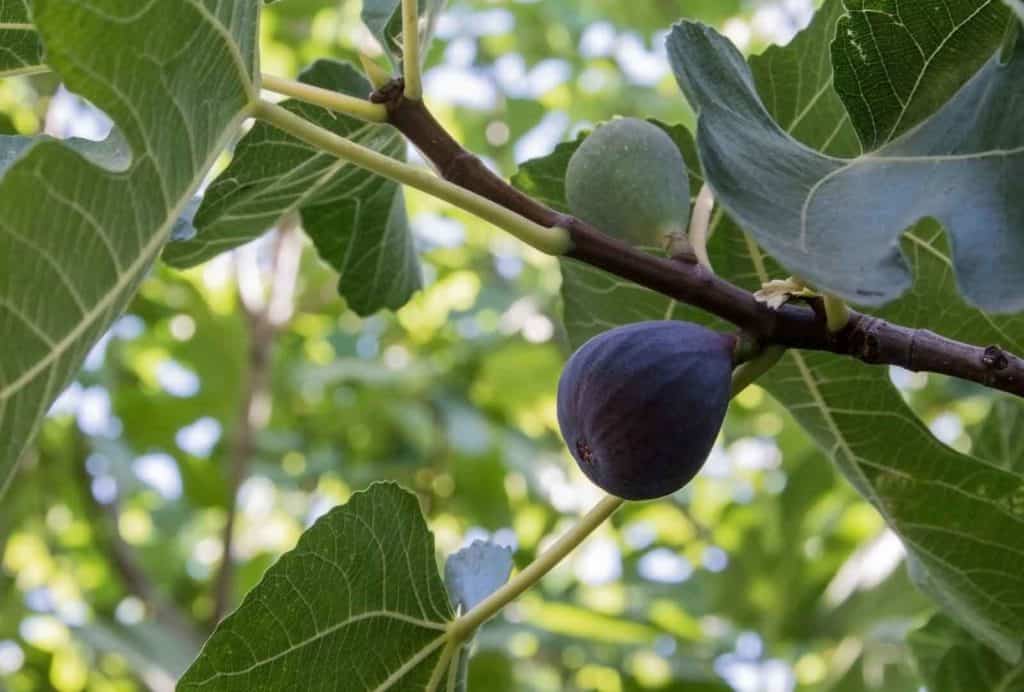